8 Tips to Turn FSBOs into Listings

Do you want to know how to list more FSBOs and boost your real estate business? Here are eight tips for converting FSBOs into listings.

Find FSBOs that didn't sell yet around your area.

Seek out older FSBOs that didn't end up selling, and pursue them. If they don't sell, they’re a good lead to put into a long-term campaign, stay in touch and list them down the road.

For example, just the other day I was riding my bike through our neighborhood and I saw a home that popped up on Zillow as sold. It didn't get listed. There wasn't a listing day.  I noticed that it had been listed three or four years prior in the recession, but it didn't sell. Someone must have simply come along, knocked on the door and said, hey, I want to buy your home. And they sold it. So, if you want to keep in touch with FSBOs that didn't sell yet, they're really good source of listing leads and leads that other agents have dropped, forgot about, and are ignoring. And you can convert them into a listing. So that's a really good strategy.

Craigslist is a really good approach to get FSBOs. I listed a FSBO that posted their home on Craigslist and they posted it kind of as a last attempt to sell it alone. And they put something in the description like, don't call me if you're an agent unless you can do x, y, z, or something like that. Long story short, I called them, emailed them, got in touch with them and won the listing, because they had just posted it.  If people are posting a home on Craigslist, chances are, they're either desperate or it's the last attempt to get the listing out there. So Craigslist leads are really good source of leads. Set up some alerts from Craigslist and have it notify you, dependent upon the price or the area, whatever you want to do.

If people are posting their homes on these, they are paying to put it out there into the community, and they're paying to advertise it. These are another really good source of listing leads. Obviously you can also pay for a FSBO lead service, but sometimes they don't scrape all the different sites. These are a really good way to scout the leads yourself.  Give them a call or text them. If they don't have a phone number, craft a message that can get their attention and post it in the web form.

Make Me Move leads convert into listings all the time. A lot of times, this is before they even put their home on the market as for sale by owner or list with an agent. Make Me Moves are kind of like, Hey, I'm thinking about selling in the future. You never really know what the situation is. I watch the market really closely in my area, and the Make Me Move leads are always converting into listing leads. And a lot of times they happen fast, almost faster than FSBOs, because they're open minded. So it’s a really good source of leads.

Tip number five is like sites like owners.com and Trulia. Tip number six is Zillow. All of these are ways that FSBOs can go out and advertise their home. You can obviously pay for lead sources too, but again, sometimes they don't scrape all the data or get to all the leads.  If the sites have an alert system, set up an alert for when new listings come on the market. Have them email you, watch those emails and be on top of it when they're newly listed.

Another great method or a tip that I've seen is ringless voicemail drops. This is kind of become a new strategy. I'm not sure of all the compliance issues. So obviously check this out, and look at the service closely, and make sure you’re being compliant before you do it. But I'm hearing from a lot of agents that ringless voicemails are really powerful. A lot of people don't answer the phone, and some agents don't want to call and give a script, but they want to leave a persuasive message to the homeowner. If that's something you'd like to do, record a ringless voicemail and give whatever your unique selling proposition is, or whatever gets you the most attention or works for you, put it into a script and then make it sound like it's natural. You can record one voicemail and test it, see how it works, and then change it if it doesn't get any callbacks or leads to a website.

Another tip is emails and text messages. I kinda clumped these together since it's the same sort of strategy. If FSBOs are putting their phone number out there, chances are it's a cell phone. Most of the phone numbers these days are cell phones, so you can easily try texting and start a conversation that way. A lot of people, myself included, would rather get a text message then a phone call when we're busy in the middle of the day working. You could also obviously send them an email if they're on one of these websites and they provide an email, or if they have a web form, you could put in an abbreviated email. But emails and text messages are another really good way to start a sales conversation. Say something like: Would you be willing to pay me a buyer's commission if I brought a buyer by your home? You could start with a conversation like that. Get the conversation going, start engaging them, offer to help and serve them, and win the listing. 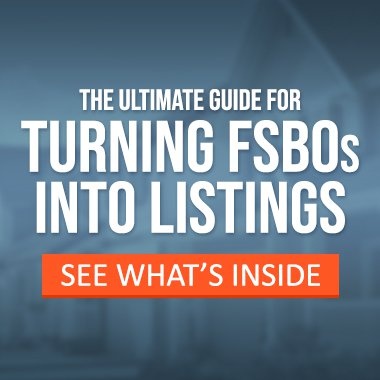